It’s been a tough 3 months on our relationship…

Getting up at 5am, catching the train into London, working a full day in a Rehab with a focus on addiction but one which also deals with stress, burnout & recovery. The intense focus needed to engage and work effectively with clients during the day, combined with a two hour commute either side, meant that by the time I returned home, collapsing on the sofa was incredibly appealing but there were a couple of occasions when Vin was on a night shift, when I went out running and one evening shared some alone time, looking out over the Southend Airport runway, whilst sipping a Jack Daniels and Coke. I’m always thrilled I enjoy my own company but it doesn’t mean that I want to be alone for a long time – just enough is good.

I probably could have hacked it, if I were single but I’m not. I’ve been married for nearly 30 years. Prioritise my relationship as important and enjoy spending time with my adult kids, when they’re around.  I’m an individual who lives an interdependent life with those important to me. Which means, not having any time in a day to spend on my marriage, with myself or my family was a challenge.

It was when I stopped – knowing my self care is good and recognising that the position could have been managed, if worked three days a week, that it became obvious that the way I felt around my husband was very similar to when I came home from working in thailand. We needed to reconnect fully. So a short break away – for us both to relax and enjoy each others company became a priority.

We decided on the Lake District.

Together over the last year or so, we’ve been exploring our country. Being and travelling abroad is incredibly important to me – as it’s when I feel more me, than at any other point. The stimulation gained from being in new places, the challenge which comes from working out a way forward, meeting new, interesting and sometimes kind, sometimes awful people. Is all part of the process. My mind loves the challenge of figuring out what to do next, how to do it and then actually getting on with it and learning from how I feel and my gut instinct and conversation on how to move forward next.

We’d wanted to visit the Lake District for a while and decided that a road trip would be fun!

We decided to book a hotel with its own spa, deciding that it would be relaxing to come back and swim, enjoy a jacuzzi and then relax in a steam room would be a nice treat for a few days – it turned out the reality wasn’t quite the same. As on the third day the jacuzzi didn’t work and the steam room took a while to heat up, the pool a little chilly but that was a good thing as it kicked me into gear to swim rather than float.

I believe our marriage has lasted as long as it has, is because Vin and me are friends. We don’t always get on. Sometimes it’s a challenge on both sides but we have fun together and I think that, is one of the most important things to be able to have in a relationship.

Vin loves to drive, i’m more nervous but for me – the straight forward drive from Southend to Kendal, wasn’t a difficult one, which I was in charge of. The drive across from Buttermere to Keswick, Vin had the joy of, as it was a mountain road and he’s far more confident than me and we discovered on our journey back that paying that bit extra for the M6 toll road, as we’d done on the way there was well worth it. We sat in congestion for an extra hour!

I mentioned fun, didn’t I…

I believe things break down within a relationship when the fun leaves. You can forget that the reason you first felt attracted to a person was because of how much they made you laugh and when we were going out, Vinnie constantly did with me. When life becomes serious and there are responsibilities and challenges to be had, then fun can go out of the window and I think it’s really important to find your way within a relationship to keep that fun alive in some small way. It doesn’t need to be in big dramatics shows but it’s a smile, a giggle, a conversation. Enjoyment in finding something both find joy in – together. 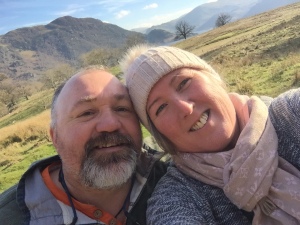 So, it didn’t surprise me that it was the drive home of over 7 and a half hours, when we reconnected fully – with silliness and humour being the main factor for this, as our road trip came to its end. It brought about a rich feeling, a depth which can’t be explained or measured. A sense of something more. When two people connect fully and all boundaries seemed blurred.

I’m not talking about codependency but am bringing in intimacy.  For me-it’s as if I; It; Us; sizzle. The sensation of wellbeing within a relationship becomes recognisable and experiential. Somatically trust is engaged.

We fulfilled our relationship goal on this trip, to have fun, enjoy each others company, spend some time reconnecting whilst doing something we both love – which is to travel!

How do you fulfill your relationship goals?